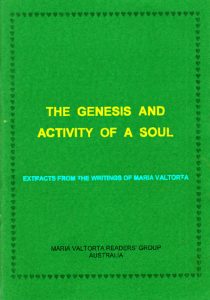 “I want to explain to you what Purgatory is, and what it consists of. And I will explain it to you, in a way that will provoke many who think they are the repositories of the knowledge of the hereafter, and are not.

“The souls immersed in those flames suffer only from Love“.

“Not undeserving of possessing the Light, but not worthy to enter therein immediately either into the Kingdom of Light, these, on presenting themselves to God, are assailed by the Light. It is a brief, advance blessedness  which makes them certain of their salvation, aware of what their eternity will be like, and knowledgeable regarding what they did to their souls, defrauding them of years of blessed possession of God. Then, immersed in the place of purgation, they are assailed by the flames of expiation.

“Those who speak of Purgatory are right in this.
But where they are not right is in wanting to apply different names to those flames.

“They are a fire of Love. They purify by inflaming souls with love. They give Love because, when the soul has therein attained the love it did not attain on earth, it is freed and joined to Love in Heaven.

“It strikes you as a doctrine different from the familiar one, doesn’t  it? But reflect.

“What does the Triune God want for the souls created by Him? Good.

“What feelings does the One who wants Good for a creature have for the creature?
Feelings of love.

“What are the first and second commandments, the two most important ones,
the ones regarding  which I said that there were no others greater,
and that in them was the key to reaching eternal life?
They are the commandments of love:
‘Love God with all your strength;
Love your neighbor as yourself‘.

“Through my mouth and that of the prophets and saints, what have I said on numberless
occasions? That Charity is the greatest form of absolution.
Charity consumes the sins and the weaknesses of man. For whoever loves, lives in God,
and in living in God he sins little. If he sins, he immediately repents, and for whoever repents there is the forgiveness of the Most High.

“What did souls fail in? In Love. If they had loved much, they would have committed few and slight sins, connected with your weakness and imperfection.
But they would never have reached the conscious obstinacy in even venial sin.
They would have endeavored not to grieve their Love, and Love,
seeing their good will, would have absolved them
even of the venial sins committed.

“Now, if poor human justice wants this, won’t the holy Justice of God want it?
And what means will God use to obtain reparation?
Himself – that is, Love –
and by demanding love.

“This God, whom you have offend­ed, who loves you in a fatherly way, and who wants to unite Himself to his creatures, leads you to obtain this union through Himself.

“Everything hinges on Love, Maria, except for the real ‘dead’, the damned. For these ‘dead ones’ Love, too, is dead.  But for the three realms – the heaviest one is the Earth.
The one where the weight of matter is abolished, but not of the soul weighed down by sin,
is Purgatory.
And finally, the one where the inhabitants share with their Father the spiritual nature which frees them from every encumbrance – the motor is Love. It is by loving on earth that you work for Heaven. It is by loving in Purgatory that you conquer Heaven,
which in life you were unable to merit.
It is by loving in Paradise that you enjoy Heaven.

“ When a soul is in Purgatory, it does nothing but love, reflect, and repent in the light of Love,
which for its sake has ignited those flames, which are already God, but which conceal God from it for its punishment.

“This is the torment. The soul recalls the vision of God received in the private judgment. It  bears that memory with it, and since having only glimpsed God is a  joy surpassing every created thing, the soul is anxious to  experience that joy again.That memory of God and of that ray of light, which have assailed it in its appearance before God, make the soul ‘see’ the true significance of the faults committed against its Good. And this ‘seeing’, together with the thought that because of those faults it has voluntarily deprived itself of the possession of Heaven and of union with God for years or centuries, constitutes its purgative affliction.

“Love, and the certainty of having offended Love, is the torment of those being purged. The more a soul has been at fault in life, the more it is as if blinded by spiritual cataracts, which make knowing and reaching that perfect loving repentance – which is the first  factor for its  purgation and entry into the Kingdom of God – more difficult for it. The more a soul has oppressed it with sin, the more love is weighed down in its living and rendered sluggish. As it is cleansed by the power of Love, its resurrection to love is accelerated and, consequently, (so is) its conquest of Love, which is completed at the moment when, with the end of expiation and the reaching of the perfection of love, it is admitted into the City of God.

“It is necessary to pray a lot, so that these souls, that suffer to reach Joy, may be swift in attaining the perfect love which absolves them and unites them to Me. Your prayers  and  your acts of intercession are as many increases in loving fire. They increase the burning. But – oh, blessed torment!

– they also increase the capacity for loving. They speed up the process of purgation. They raise the souls immersed in that fire to higher and higher degrees. They carry them to the threshold of the Light. They open the gates to Light, finally, and introduce the soul into Heaven.

“To each of these operations, provoked by your charity towards those who have preceded you into the second life, there corresponds a leap in charity for you: the charity of God, who thanks you for providing for his children in affliction, and the charity of the afflicted, who thank you for working to introduce them into the joy of God.

“Never do your loved ones love you so much  as  after  earthly  death,
for their Love is now infused with the Light of God, and in this Light they understand how you Love them, and how they should have loved you.

“They can no longer say words to you that ask for forgiveness and provide love. But they say them to Me for you, and I take to you these words of your dead, who are now able to see and Love you as they should. I take them to you together with their request for Love and their blessing. A blessing already valid from  Purgatory on, for it is already infused with the inflamed Charity which burns and purifies them. Perfectly valid, later, from the moment when, freed, they come to meet you on the threshold of Life, or rejoin you therein, if you have already preceded them into the Kingdom of Love.

“Trust in Me, Maria. I work for you and for those you most dearly love.
Relieve your spirit. I come to give you joy. Trust Me.”