This is strictly one LP transferred to CD, however there are some extra tracks added with source mentioned. The main album is simply “Pete Fountain with The Jubilee Singers”. The only Jubilee Singers of any note that I can find are the “Fisk Jubilee Singers” dating back to the 1800s and as far as I can assertain they still exist…… No No No not the original singers, silly. I have added a wiki article below about the Singers, it is a fabulous story.

Amazing Grace – Do any come close to this classic giant

The Fisk Jubilee Singers are an African-American a cappella ensemble, consisting of students at Fisk University. The first group was organized in 1871 to tour and raise funds for college. Their early repertoire consisted mostly of traditional spirituals, but included some Stephen Foster songs. The original group toured along the Underground Railroad path in the United States, as well as performing in England and Europe. Later 19th-century groups also toured in Europe.

In 2002 the Library of Congress honored their 1909 recording of “Swing Low, Sweet Chariot” by adding it in the United States National Recording Registry.[1] In 2008 they were awarded a National Medal of Arts.

See these photos and more 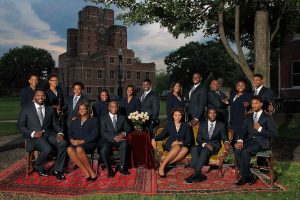