BUT IS IT REALLY (a conundrum)
Genealogy Of Jesus as it appears in: The Gospel according to Matthew 1:1-17

I have posed this dilemma to my Priest and other noted Catholics without any great resolution. Joseph was Jesus’ STEP FATHER.
Mary was of Aarons line as I understood it.

(SEE BELOW FOR DETERMINATION)

1    Roll of the genealogy of Jesus Christ,son of David, son of Abraham:
2   Abraham fathered Isaac, Isaac fathered Jacob, Jacob fathered
Judah and his brothers,
3   Judah fathered Perez and Zerah, whose mother was Tamar, Perez
fathered  Hezron, Hezron fathered Ram,
4   Ram fathered Amminadab, Amminadab fathered Nahshon, Nahshon
fathered Salmon,
5  Salmon fathered Boaz, whose mother was Rahab, Boaz fathered Obed,
whose mother was Ruth, Obed fathered Jesse;
6  and Jesse fathered King David. David fathered Solomon, whose mother
had been Uriah’s wife,
7  Solomon fathered Rehoboam, Rehoboam fathered Abijah, Abijah
fathered Asa,
8  Asa fathered Jehoshaphat, Jehoshaphat fathered Joram, Joram
fathered Uzziah,
9  Uzziah fathered Jotham, Jotham fathered Ahaz, Ahaz fathered
Hezekiah,
10 Hezekiah fathered Manasseh, Manasseh fathered Amon, Amon fathered
Josiah;
11 and Josiah fathered Jechoniah and his brothers.
Then the deportation to Babylon took place.
12 After the deportation to Babylon: Jechoniah fathered Shealtiel,  Shealtiel fathered Zerubbabel,
13 Zerubbabel fathered Abiud, Abiud fathered Eliakim, Eliakim fathered Azor,
14 Azor fathered Zadok, Zadok fathered Achim, Achim fathered Eliud,
15 Eliud fathered Eleazar, Eleazar fathered Matthan, Matthan fathered Jacob;
16 and Jacob fathered Joseph the husband of Mary;
of her was born Jesus who is called Christ.
17 The sum of generations is therefore: fourteen from Abraham to David; fourteen from David to the Babylonian deportation; and fourteen from the Babylonian deportation to Christ.
18 This is how Jesus Christ came to be born. His mother Mary was betrothed to Joseph; but before they came to live together she was found to be with child through the Holy Spirit.
19 Her husband Joseph, being an upright man and wanting to spare her disgrace, decided to divorce her informally.
20 He had made up his mind to do this when suddenly the angel of the Lord appeared to him in a dream and said, ‘Joseph son of David, do not be afraid to take Mary home as your wife, because she has conceived what is in her by the Holy Spirit.
21 She will give birth to a son and you must name him Jesus, because he is the one who is to save his people from their sins.’
22 Now all this took place to fulfil what the Lord had spoken through the prophet:
23 Look! the virgin is with child and will give birth to a son whom they will call Immanuel, a name which means ‘God-is-with-us’.
24 When Joseph woke up he did what the angel of the Lord had told him to do: he took his wife to his home;
25 he had not had intercourse with her when she gave birth to a son; and he named him Jesus.

I have come to the opinion after a lot of research that the image below explains the whole matter.
Genealogy Of Jesus according to Blessed Anne Catherine Emmerich 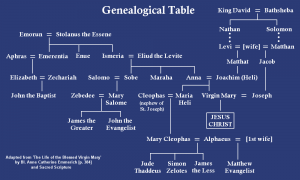 As you can see here it is a very interesting family tree and it is from the writing of a wonderful Catholic of who I have read greatly
Catherine Emmerick:

At the coming together of Ann & Joachim the two houses were joined. So Our Lady was from David via her father.